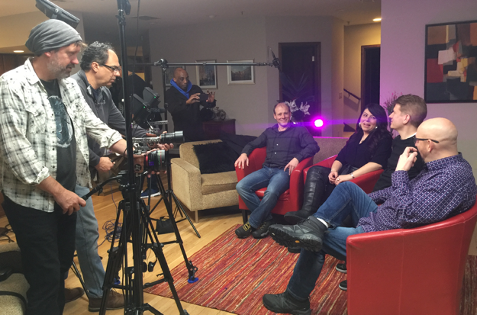 The production team for the start of film came from various cities, Toronto, Nashville, South Carolina. We were to all start the journey in Minneapolis. The hired director at that time (who left the film for personal reasons) met me in Los Angeles to have lunch with Andre Cymone and his wife Katherine. But we only had time for a quick meeting, as we had just learned that a massive snow storm was descending on Minneapolis. As the rest of the production team had just arrived in Minneapolis, the director and I thought it was best to get there quickly to join them. Better to be with our team than having to wait for days to get a flight in. We raced to the airport straight from the lunch with Andre and got on the next flight out. Just as we landed in Minneapolis the airport shut down, all flights in and out were canceled. We had arrived just in time!

The other reason we were glad to have beaten the storm: we had tickets to a very special event at Paisley Park in the next few days and didn’t want to miss it! However, it turned out that the event was cancelled due to the storm. The snow piled up. It was unlike anything they’d seen in decades, although not unfamiliar for Canadians! All roads were closed. We had rented an Airbnb big enough to sleep our entire crew. So the team was together with nowhere to go and nothing to shoot.

The snowplows came out the next day but the roads were still icy so we stayed in for days. However, there was no stopping the people of Minneapolis. People who we had intended to interview came to us. We turned the house into a studio and started shooting.

When we finally did manage to shovel and push our vehicles out of the deep snow banks, we braved the icy roads for a dinner out with the “People of Paisley Park”. We took the photo above at that dinner meeting.

They were more than fans. They had received special invites to Paisley Park for hundreds of parties and performances of Prince over the years. Sometimes Prince would perform for only 20 of them. No cameras allowed, no selfies, just “be in the moment” is all he asked for.

At dinner we noticed they were a bit suspicious of us and very protective of Prince. He had only passed away less than two years earlier and the pain of the loss was still very deep and present. I didn’t understand its depth at the time but as I wrote earlier, I got to know what Prince meant to so many beyond just music. It was his messaging of love and unity. We all need that, after all. And Prince didn’t just play that role, he embodied it.

So once we gained their trust with our true intentions for the film they shared their pain, their tears and then … the incredible stories. Some of those stories are in the film, but unfortunately there were many more that we couldn’t include.

We soon became old friends and we were on our way to becoming part of Prince’s Fam.